As we toured the construction in progress of the new Pennsylvania home for my in-laws, I couldn’t help but notice the vaulted ceiling over the landing midway up the staircase to the second floor. There was a recessed light fixture centered in the ceiling, thirteen feet above the landing. This space seemed to call out to me, and I offered to design, construct, and install a hanging sculpture of blown glass that would accentuate the area and interact with, without obstructing, the light from above. They agreed, and so began a six-month creative process that involved us all, which produced a very satisfying final installation. 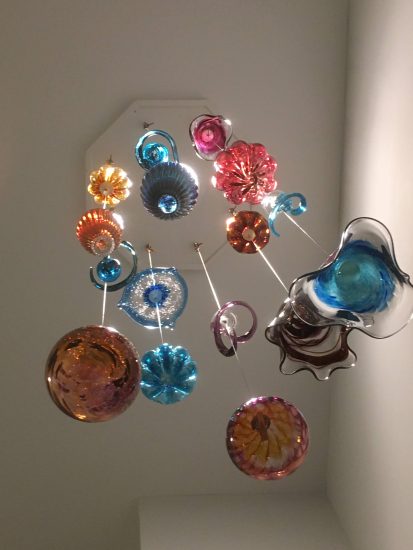 My initial concept was to suspend eight pieces of blown glass from eight wires placed symmetrically around the light fixture. The sculpture would produce no light by itself but transmit, refract, and glow with the light from the fixture without interfering with the lighting of the stairwell.

The first challenge was of an engineering nature. Pictures and plans of the home construction in progress were obtained to determine the best way to anchor the sculpture to the ceiling. I established a weight limit of 30 pounds for the entire sculpture, which was originally planned to consist of eight blown glass objects. I chose to use heavy-duty, stranded steel wire, rated for 150 pounds to provide plenty of margin for the expected weight. The wire is plastic coated to resist corrosion. I also procured the recommended crimp tool and sleeves with which to attach the glass pieces to the wires.

I created a drawing, and then a scale model of the proposed installation. The glass pieces were intended to be long-necked, flaring into discs of about 8 to 10 inches in diameter, in colors of burgundy red, and blue as suggested by the clients. After the first piece was made, the clients did not like the shape, which they described as looking like a “witch hat.” They also wanted more variation in the color scheme. It was evident that the average weight of each piece would be under 2 pounds, so I decided to make many pieces of different sizes, colors, and shapes, with the intent to hang 16 of them that got final approval.

The Art of Collaboration

Over the course of several months, I experimented with different ideas and sent pictures for the clients to review. During that time, the clients also expressed a desire to alter the anchoring structure on the ceiling from a metal railing to a wood octagon with eye-hooks that could be painted to match the ceiling. They hired a contractor to fabricate the structure and install it on the ceiling. This meant that when it came time to install the final sculpture, there was much less work to be done!

The final installation was done a few days before Thanksgiving when the clients would be hosting friends and family at the annual get-together, which would be the first held in their new home (no pressure). About half of the blown glass pieces were shipped ahead, with the remaining pieces hand carried in my luggage. On our arrival, all the pieces were unpacked and laid out on the dining room table. At that point, there was no final design detail, except that each of the eight wires would hold two pieces of glass, and no glass would be suspended more than five feet below the ceiling. Some of the pieces were closed on the bottom, which meant that they would have to attach to the bottom of a wire. Others were open-ended so that they could be hung at any point on a wire. It took four of us all afternoon to make the final design choices, attach the pieces to the wires, and hang them. It turned out to be a fun, collaborative, glass party! 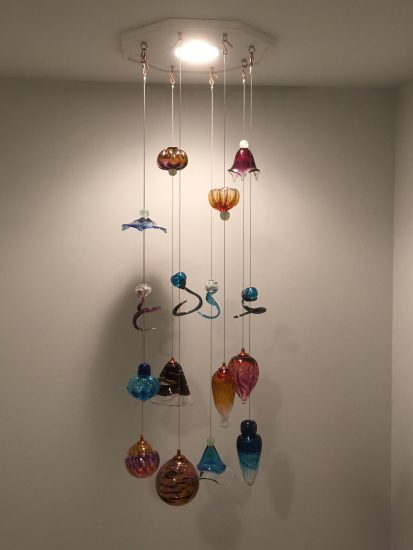 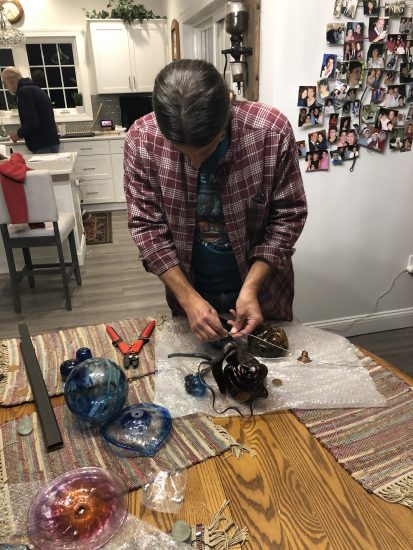 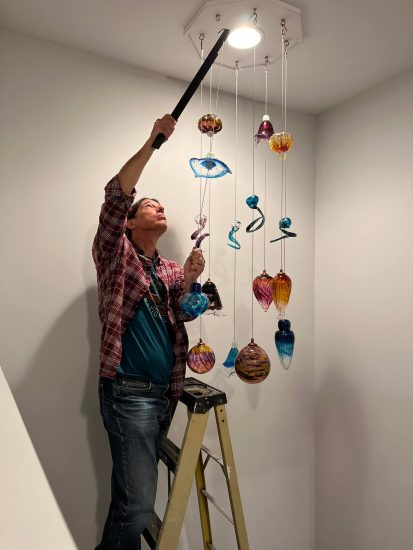 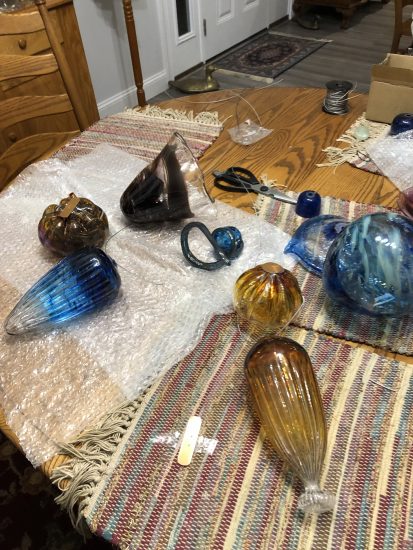 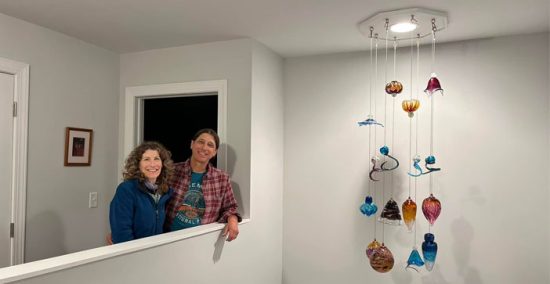 Manage Cookie Consent
We employ very basic, anonymous cookies to optimize your user experience on our website. Consenting to these technologies will allow us to process data such as browsing behavior or unique IDs on this site. Not consenting or withdrawing consent, may adversely affect certain features and functions.
Manage options Manage services Manage vendors Read more about these purposes
View preferences
{title} {title} {title}